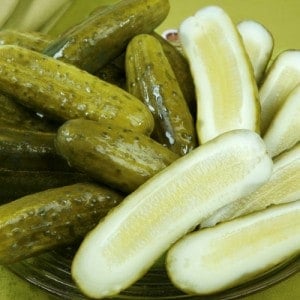 Approximately 85 per cent of pregnant women crave at least one thing but what that can be varies considerably. Nobody is completely sure as to why cravings occur during pregnancy but some believe it is because of the extreme hormonal changes impacting on the mother’s sense of taste and smell. Others believe it is the body’s way of sending a message that it is in need of particular nutrients. Some cravings appear very strange for example some expectant mothers crave cigarette butts! This has been linked to the mother’s body having an iron deficiency even though there is no iron to be consumed in cigarette butts! Some experts believe that the common craving for chocolate is the mother having a lack of B vitamins, red meat seems to obviously be a need for protein and a mother who ate vast quantities of peaches thinks that it was her need for beta-carotene.

Some common cravings are:

•    Cheese – which contains calcium, aluminium and phosphorous. A less fatty alternative is broccoli and other green vegetables
•    Milk – contains calcium and amino acids such as tryptophan, leucine and lysine
•    Eggs – are full of protein and also contain amino acids, sulphur, selenium and fat in the yoke. In the white of an egg is fat-dissolving choline. Rather than have the popular accompaniments such as sausages and bacon replace with oily fish like mackerel or salmon and dried beans
•    Apples – are a healthy craving as they contain potassium, phosphorous, calcium, magnesium and pectin which your body craves if you have a high-fat diet as it lowers cholesterol
•    Melon – contains vitamin A and potassium. Cantaloupe melons are rich in vitamin C, magnesium, calcium, phosphorous, inositol and biotin
•    Peanut butter and nuts – contain protein, fat and B vitamins and you need more of all three when you are pregnant. You can also eat lots of oily fish to diminish cravings for these nutrients and will mean less calorie consumption
•    Pickles and olives – when you are pregnant your body requires more sodium which these food contain. If you eat too much sugar, your body will crave salt to create a balance

If you eat a well-balanced and healthy diet you should get all the nutrients you require. Sometimes cravings may occur because you need something other than food. It could be an emotional requirement that needs fulfilling. Before you reach for a chocolate bar consider whether it is a cuddle that you actually want.

Make sure that you eat breakfast everyday as skipping it can make cravings more extreme, take lots of exercise and ensure your diet is wide and varied.

Guest article written by Eirian Hallinan who has written numerous articles in the baby care field. She believes in healing naturally, first, especially when it comes to infant colic.

I crave Honeycrisp Apples and A LOT of them. I also crave Kettle cooked sea salt & vinegar chips, starburst, orange tic tacs, chewy sweet tarts, raspberries & celery w/ veggie dip. My first pregnancy was FAR from healthy when it came to cravings. I'm unsure why I crave so many things on a healthier level with my second pregnancy (minus the candy of course). I also don't crave them on a mega "gimme gimme gimme now!" level either. I just casually want them.