Once school is out for Winter Break, the movies start coming on TV.  I have a few favorites on my Christmas Movies list!

My Sister-in-Law is a big Christmas movie buff and even collects them, isn’t that neat?  Some Christmas movies are horrid, but several are wonderful stories you can watch over and over (and over again!)

Here is a list of the top 10 Christmas movies that are suitable for Kids. 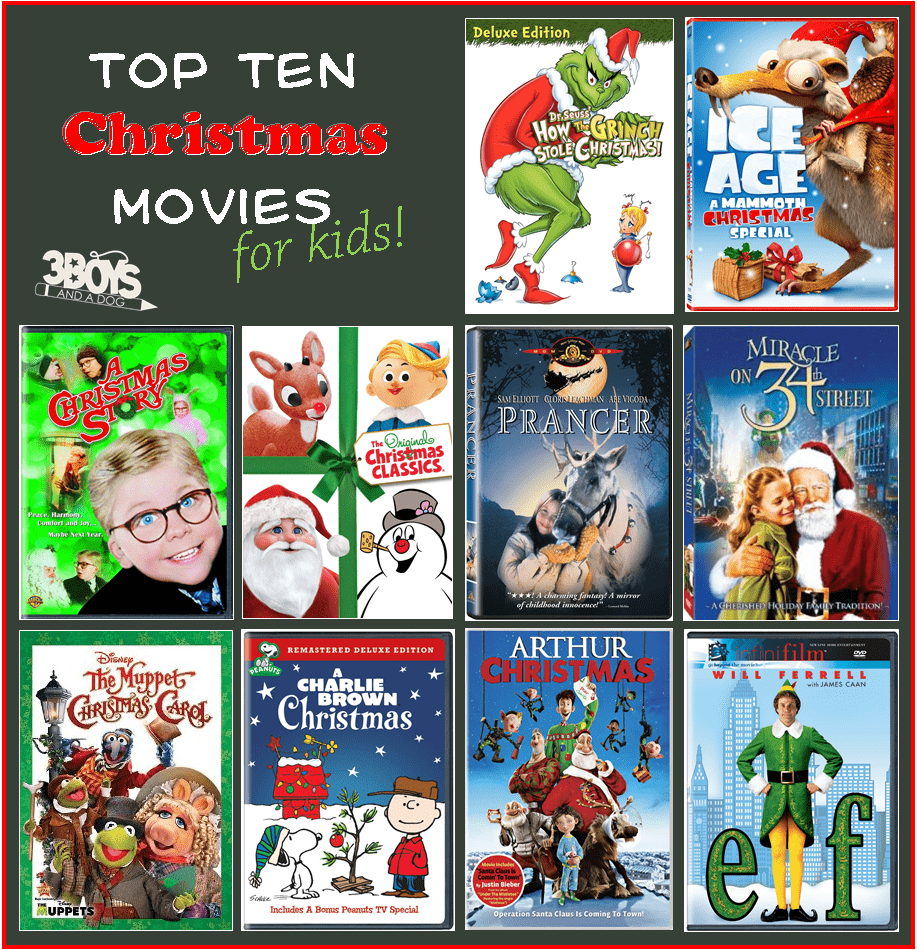 Obviously, time is running out to get these ordered in time for Christmas, so make a trip to Target or flip through NetFlix!

– Together with kind, humble Bob Cratchit (Kermit the Frog) and his family, the Spirits open Scrooge’s eyes — and his heart — to the true meaning of Christmas. Filled with original music and dazzling special effects, this restored and remastered 50th Anniversary Edition of THE MUPPET CHRISTMAS CAROL will become a holiday tradition your family will treasure all the days of the year.~~(C) The Muppets Holding Company, LLC and BVHE.

– Charles M. Schulz’s Peanuts gang discovers the true meaning of the season in this perennial holiday favorite. Includes as a bonus It’s Christmas Time Again, Charlie Brown (1992/23 min.) and a Peanuts picture frame that can be used as an ornament.

– Arthur Christmas reveals the incredible, never-before seen answer to every child’s question: ‘So how does Santa deliver all those presents in one night?’ The answer: Santa’s exhilarating, ultra-high-tech operation hidden beneath the North Pole. But at the center of the film is a story about a family in a state of comic dysfunction and an unlikely hero, Arthur, with an urgent mission that must be completed before Christmas morning dawns.

– This delightfully funny holiday gem tells the story of Ralphie Parker (Peter Billingsly) a 1940’s nine-year-old who pulls out all the stops to obtain the ultimate Christmas present. It’s Christmas time and there’s only one thing on Ralphie Parker’s Christmas list this year: a Red Ryder Carbine Action 200-Shot, Range Model Air Rifle, but many obstacles stand in the way of his dream because every adult that he confronts keeps telling him he’ll shoot his eye out.

– Have you herd the news? Your favorite sub-zero heroes are back in a holiday adventure for the whole family! When Sid accidentally destroys Manny’s heirloom Christmas rock and ends up on Santa’s “naughty list,” he leads a hilarious quest to the North Pole to make things right and ends up making things much worse. Now it’s up to Manny and his prehistoric posse to band together and save Christmas for the entire world!

– A wounded reindeer and a precocious eight-year-old girl form an everlasting bond in this tender holiday drama about true devotion and friendship. An enchanting film full of heart and gumption” (Roger Ebert), Prancer will set your imagination aflight! Will Jessica be able to help her antlered friend find his way back to Santa in time to make their deliveries on Christmas Eve? The magical final scene is sure to make your heart soar!

– This hilarious Christmas film tells the tale of a young orphan child who mistakenly crawls into Santa’s bag of gifts on Christmas Eve and is transported back to the North Pole and raised as an elf. Years later Buddy learns he is not really an elf and goes on a journey to New York City to find his true identity.

– Six year old Susan has doubts childhood’s most enduring miracle Santa Clause. Her mother told her the “secret” about Santa a long time ago, so Susan doesn’t expect to receive the most important gifts on her Christmas list. But after meeting a special department store Santa who’s convinced he’s the real thing, Susan is given the most precious gift of all – something to believe in.

– Every who down in Who-ville likes Christmas a lot, but the Grinch who lived just north of Who-ville did NOT! So the cuddly as a cactus Grinch (with termites in his smile and garlic in his soul) tries to wipe out Christmas for the cheerful Who-villains, only to discover: maybe Christmas, he thought, doesn’t come from a store.

– Rudolf, Frosty, and other TV specials in one great boxed set of 7 favorites!