These Rhode Island State Books for Kids are sure to please and fascinate your children as they learn all about the state of Rhode Island.

These books contain so much information about the long and varied History of this great State as well as stories about people from Rhode Island .

The following Rhode Island-themed books for kids cover all aspects of the home-school education coin - from picture books to workbooks; from learning to read up to chapter books! 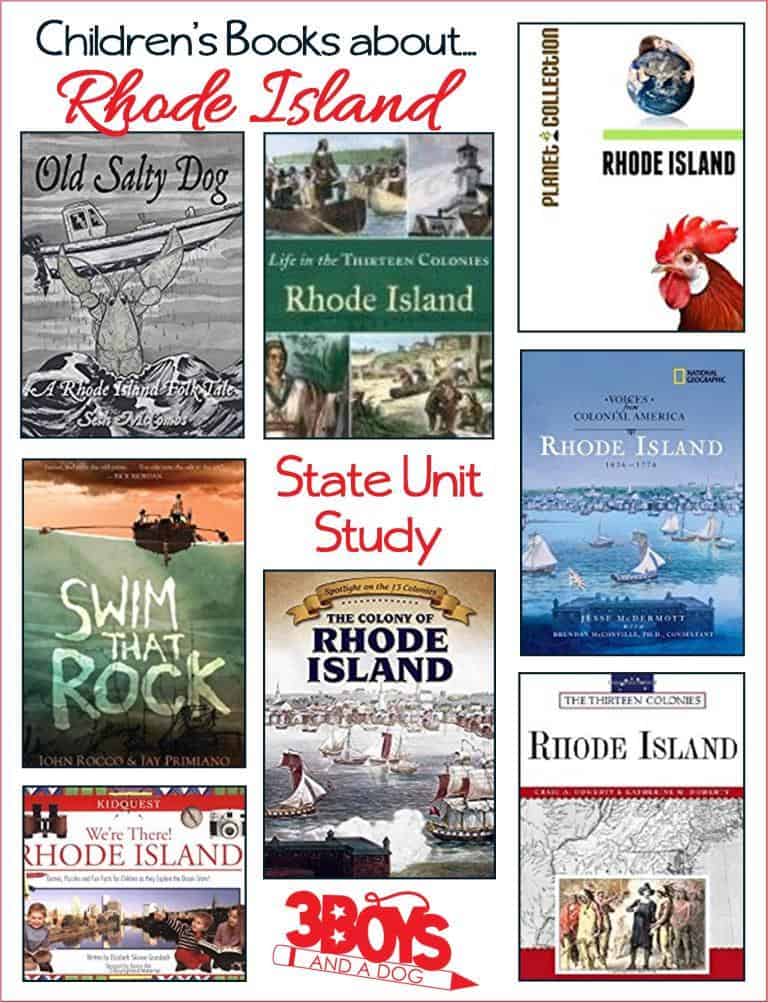 Old Salty Dog is the tall tale of a quahogger who encounters all the great sea monsters of myth and legend in his quest for clams. The art is whimsical, truly representative of the rough New England waters where the story takes place. This book will delight and fascinate ocean lovers of all ages.

The nations smallest state is jam-packed with interesting sights, beautiful vistas, and fascinating people. Readers will come to see that what Rhode Island lacks in size, it makes up for in personality. Maps, fact sheets, and a pronunciation guide are provided.

Visiting Rhode Island with your kids? This book is sure to engage and entertain your children with fun scavenger hunts and puzzles relating to what you are seeing as you explore Newport and Providence. Beautiful photography and eye-catching graphics will keep your children busy at museums in both cities, at the Breakers Mansion and Newport Cliffwalk and at other major attractions around Rhode Island.

Presents information about the state of Rhode Island, its nickname, motto, and emblems.

Rhode Island discusses life in the early colony, including the growth of the colony under Roger Williams, farming, trading, the history of slavery in the colony, the presence of pirates, and the Pequot War and King Phillips War.

An introduction to the geography, history, economy, people, environmental issues, and interesting sites of Rhode Island.

Traces the history of Rhode Island from the arrival of the first European settlers in the early seventeenth century through 1790 when it became the thirteenth state to join the Union.

Did you know that Rhode Island was founded by an outcast of the Massachusetts Bay Colony and that his ideal of religious freedom later became a guaranteed right of every American when the Bill of Rights was added to the Constitution?

The Big Rhode Island Activity Book! 100+ activities, from Kindergarten-easy to Fourth/Fifth-challenging! This big activity book has a wide range of reproducible activities including coloring, dot-to-dot, mazes, matching. word search, and many other creative activities that will entice any student to learn more about Rhode Island.

One of the most popular misconceptions about American Indians is that they are all the same-one homogenous group of people who look alike, speak the same language, and share the same customs and history. Nothing could be further from the truth! This book gives kids an A-Z look at the Native Americans that shaped their states history.

In Narragansett Bay, scrabbling out a living as a quahogger isnt easy, but with the help of some local clammers, Jake is determined to work hard and earn enough money to ensure his familys security and save the diner in time. Told with cinematic suspense and a true compassion for the characters, Swim That Rock is a fast-paced coming-of-age story that beautifully and evocatively captures the essence of coastal Rhode Island life, the struggles of blue-collar family dynamics, and the dreams of one boy to come into his own.

A biography profiling the life of Roger Williams, the founder of Rhode Island and the first American leader to support the separation of church and state. Includes source notes and timeline.

As a part of the updated Planet Collection, RHODE ISLAND offers facts, descriptions and thought inspiring questions alongside amazing photographs of Rhode Island.

Toddlers and babies will love looking at the large photos, while the older children will be able to grow their minds through reading the fun fact filled passages.

It is 1654 in New England, native land of Algonquin tribes, among them the Pocasset, Wampanoag, and Narrangansett people. The pilgrims - called Coat-men by the Wampanoag - have settled here in the natives territory at Patuxit, a place that the Pilgrims have renamed Plymouth. Weetamoos father, Corbitant, is sachem, or chief, of the Pocassets. He is mistrustful of the colonists and imparts his beliefs about them to his daughter, who is next in line to become chief.

Meet Rhode Island Red, an egg-sized human whos the greatest hero the smallest state of the Union has ever known. You say youve never heard of him? Thats because the Paul Bunyans and Pecos Bills had something Rhode Island Red didnt: biographers.

Rhode Island is Americas smallest state, but its history is far from tiny. This information-rich text takes readers on a journey through Rhode Islands colonial history and the role it played in gaining independence for the American colonies. Students will learn about Rhode Islands religious and social environment, early industry, and key historical figures.

A history of the Rhode Island colony, from the lives of its earliest Indian inhabitants through its involvement in the American Revolution.

Our alphabet journey takes us next to the charming state of Rhode Island in R is for Rhode Island Red: A Rhode Island Alphabet. It may be our smallest state but its presence is unmistakable - rich in history, breathtaking beauty, and famous for its neighborhoods filled with character. With every turned page readers will be treated to Rhode Islands incredible scenery