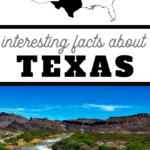 What do Dr. Pepper and President Dwight D. Eisenhower have in common? They’re both from Texas! Texas is one of those states even non-Americans can point out on a map – it’s one of the largest states and frequently is in the news. Grab your cowboy boots and let us learn some interesting facts about Texas State!

As we travel around the United States with our 50 states unit study, our next stop is Texas. (If you’re driving across Texas, it may take you over a day!)

El Paso, TX (far left) to Beaumont, TX (far right) takes 12 hours to drive through! (That’s a little less than the 14 hours it would take to drive from New York City to Jacksonville, FL.) With a state this big, there’s sure to be a lot of interesting facts about the state of Texas to learn about and explore.

Everything’s bigger in Texas! It’s the second-largest state with both population and size. The Dallas/Fort-Worth area of Texas has a higher population than 39 states!

From sports teams to music (Austin, TX is known as the Live Music Capital of the World), there’s no shortage of interesting things in this grand state.

The name “Texas” comes from the Native American word “tejas,” which means “friends.” Learn more about this friendly state known for its size, attractions, and a number of cool things.

Fact One: Texas is called the Lone Star State.

If you look at Texas’ state flag, there’s one star, a lone star! This star represents Texas’ fight for independence.

Here’s some ideas to help you learn about the Lone Star state:

Recreate Texas’ flag (with a lone star) with this simple craft.

Make a map of Texas with this DIY Texas region map.

Good Night, Texas by Adam Gamble brings children all around to the different places that can be found only in Texas.

With tiny pieces of paper, create a construction paper collage of the Texas flag.

Fact Two: You can find cacti all over Texas!

Cactus (or the plural, cacti) are popular all over Texas! This prickly green plant doesn’t need much water, which makes them a great fit for Texas’ humid weather.

Learn more about cacti with these ideas:

How do some plants live with almost no water? Find out with this cactus science experiment!

Nobody Hugs a Cactus by Carter Goodrich is a sweet book about kindness. Hank, the cactus, decides he needs a hug.

Fact Three: Three presidents have been from Texas.

Those three are George W. Bush, George HW Bush, and Lyndon B. Johnson.

Learn more about these three men with these ideas:

Make your own presidents from cookies. These examples used Washington and Lincoln, but you can adapt them for Bush, Bush, and Johnson.

Our Country’s Presidents, by National Geographic, is a collection of information about each president including rich images, timelines, and more.

George HW Bush fought during WWII as a naval aviator. Learn more about the US Navy and make this submarine craft.

George W. Bush was president during the attacks on September 11. Make this simple heart memorial of the Twin Towers as a small memorial.

Johnson was president after JFK’s assassination. He was a strong proponent for civil rights. Create these multicultural paper dolls as a reminder.

Fact Four: The state flower of Texas is the bluebonnet.

You can see these flowers at their best during springtime. They’re beautiful to look at, but these pretty flowers are not edible!

Learn more about bluebonnets with these ideas:

Create these fingerprint bluebonnets in honor of Texas’ state flower!

For crafty kids, make these quilled bluebonnets from paper!

Tomie DePaola is known for his classic picture books. In The Legend of the Bluebonnet, we meet a young girl whose tribe is in desperate need of rain.

Get messy with this bluebonnet painting canvas activity!

Fact Five: Texas is home to the Johnson Space Center and NASA.

Houston, we have a problem.

President Lyndon B. Johnson was from Texas, and NASA’s Space Center is named in his honor. Texas has been the home for human spaceflight and the Space Center sees over a million visitors each year.

Learn more about NASA with these ideas:

Make your own interactive rockets…with a paper straw!

In this activity from NASA, build and launch a foam rocket in this interactive STEM activity!

Counting on Katherine by Helaine Becker tells the story of Katherine Johnson. As a child, Katherine skipped several grades and despite a lot of sexism and racism, she was able to save Apollo 13’s mission.

Tell a story with these paper rocket puppets.

Kid-Friendly Things to do in Dallas

New Braunfels: 7 Things to do with Kids!