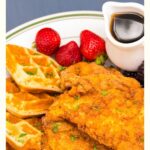 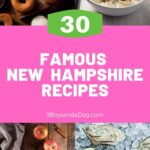 Famous New Hampshire Recipes include apple cider donuts, clam chowder, lobster rolls, oysters, poutine, eggs benedicts, and chicken and waffles. These popular recipes will remind you of the best part of being in New Hampshire.

Don’t forget to check out this New Hampshire Unit Study as well to learn more about fun state facts and history.

New Hampshire is known as the Granite State. It was one of the earliest formed states and is the site of Mount Washinton. It’s also where the movie “Jumanji” was filmed in 1995. Being near the coast and having fertile apple orchards influences the food culture and what is most popular.

These 10 food categories include three recipes each from notable professional chefs and home chefs with the recipe testing and dish development done for you. All you need to do is enjoy the wonderful combinations that make these dishes uniquely New Hampshire.

Apple cider donuts are delicious little snacks made with apple cider and dusted with sugar.

Clams caught on the coast are used to make amazing local clam chowder. It’s custom to eat it out of a bowl made of bread.

These orchards are all over New Hampshire. This is one of many dishes made with fresh apples.

Fresh apple pie enfolded in a flaky crust is a staple in New Hampshire. They use green, red, and yellow apples depending on the texture and flavor you want to have. Dust with a little raw sugar for an even crunchier crust.

Lobsters are caught and brought to restaurants the same day to make these sandwiches. Toss the lobster in a mayonnaise sauce and serve it in a hoagie roll.

Restaurants cook oysters in herby aromatics and are tightly closed when you first get them. When cooked, they open up and you can tip the flavorful seafood right into your mouth from the shell.

Poutine is originally a Canadian dish of french fries topped with gravy. Many different variations have popped up and New Hampshire has captured the essence of this dish.

Poached eggs served on English muffins with a rich hollandaise sauce poured over the top is one of the best breakfasts served in New Hampshire.

Chicken and waffles are a popular breakfast but they can be eaten for any meal. They are usually topped with syrup and are especially delicious with hot sauce.

Lake bass is caught, cut into chunks, and fried the same day. They are popular for lunch with a side of french fries.

The topic is tricky, but no doubt you’ve written great quality content on the insurance topic.

This is very nice . Thanks for sharing this.

Thanks for your good posts See how much I think. I came up with an overall varied and delicious recipe. Click on the link below and pray for me 😉

Hey dear, I read your article It's really fascinating. I'm already starting a small website. Check it out and give me advice on how I can take this forward. Thanks.