I know this can be an odd one.  But, it is the perfect Earth Day craft for your little one!  Normally one doesn’t associate the name “litter bug” as being something cute. However, that’s the case with this Earth Day craft. Making litter bugs out of recycling is an easy thing even your child can do.

Most people think of “litter bugs” as people who carelessly throw their garbage on the ground instead of putting it in a garbage can. This habit is not only bothersome, but it also isn’t good for the environment. It makes the areas that have been littered look bad as well. 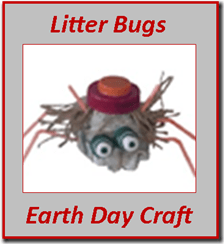 Instead of associating the term litter bug in a negative way, why not let your children make a litter bug out of recycled materials for Earth Day? It’s an easy craft to make and can be given to people who may be free with their litter. Perhaps they’ll get the hint that littering is wrong and change their own litter bug ways.

Here’s what your child needs to make their own litter bug for Earth Day:

An adult may need to cut the paper egg carton in segments. Give your child one segment at a time so they can complete one litter bug before beginning a second or third.

1. Turn the egg carton segment upside down so the bottom is facing up. This will be the litter bug’s body.
2. Use recyclable items from around your home to decorate the bug. If you don’t have google eyes, why not use small caps from squeeze dish soap bottles?
3. Several twigs can be used for legs. Poke a hold in the carton to push the twigs through.
4. Use yarn pieces for hair.
5. A bottle cap can be glued on for a hat.

Another way for your child to create a litter bug for Earth Day is to use crumpled up newspapers as the base, or body, of the bug. Glue the various items you’ve found lying around your house onto the body. Give it hair, a bottle top cap, and eyes.

Let your child make several litter bugs this Earth Day. You don’t have to make them wait until Earth Day to try this craft. In fact, if you wanted, you could create a recyclable box for your child to keep items in for crafts. By doing this, not only will you encourage their creativity and fine motor development, you’ll also encourage them to recycle items rather than tossing them in the garbage.

If they learn to recycle now, even if it is merely for making Earth Day crafts like the litter bug made with recycled items, this may encourage them to continue reusing and recycling items in the future. That would be good not only for them, but also for the environment.