For those of you who love nothing more than a ghost hunt and a spooky story this Holiday season, then Illinois could be just the State you’re looking for. Haunted cemeteries, abandoned hospitals, forest roads and deserted schools, Illinois has got it all!  So if you like a good old fashioned scare, then check out these creepy and probably haunted places…

This list of Kid Friendly Things to do in the United States might be so much fun to do as well. 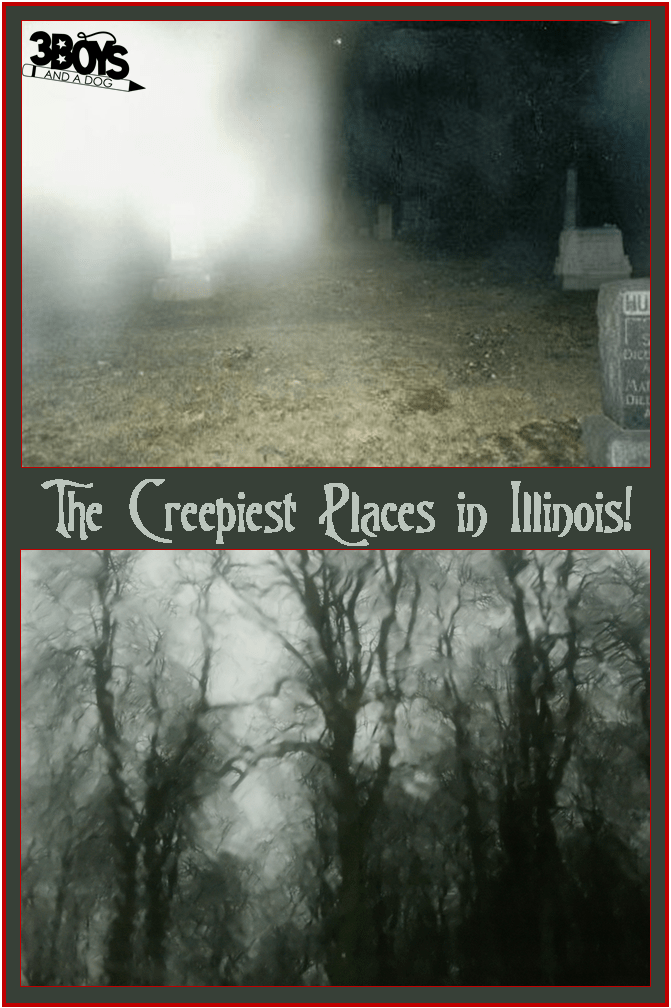 Manteno State Hospital has long been abandoned, but who knows what secrets are held within the crumbling walls. Built in the 1930s, the hospital housed over 6,000 residents and featured an underground network of service tunnels which linked the individual buildings. In 1939 an incident known as the ‘Manteno Madness’, 384 patients and staff developed typhoid fever and more than 50 people died. Since the hospital’s closure in 1985 many people who have visited the remains have left with a series of very strange stories. Reports of apparitions of patients and nurses and the sound of voices have allegedly been heard over the now long defunct intercom.

Reputed to be one of the most haunted locations in central Illinois, Greenwood Cemetery was originally an Amerindian burial ground. Later, in the 1830s it was used by the first white settlers to bury their dead. Some of the more spooky stories concern the ghosts of dead and dying Confederate prisoners who were dumped at the cemetery on the way to prison camp. The bodies were buried in the hillside, but years later, heavy rain collapsed the hill and mixed all the bodies together. Although the hill was later repaired, it is believed that the spirits of the men were forever disturbed. Another eerie story concerns a so called ‘Greenwood bride’ who wanders the cemetery grounds in her wedding dress searching for her murdered fiancé.

This reputedly haunted mansion was built in 1838 and is also known as the Crenshaw House or the Old Slave House. Its owner John Crenshaw was one of the wealthiest men in the entire state and owned over 740 slaves. Reports of the mansion being haunted date back as early as 1851when the German family who cared for the estate reported hearing strange sounds coming from the attic. After the Civil war and the abolition of slavery the house was opened as a tourist attraction and visitors began to report oddities such as phantom footsteps, singing and voices. It was believed that no one could spend the night in the attic, many tried and true to the rumor, all of them were scared off before dawn. In the 1920s it believed that one ghost hunter died after spending the night there. Today, the mansion is now closed to visitors and Hickory Hill scores very highly in the livability scores according to AreaVibes.

For over three decades Batchelor’s Grove Cemetery has been one of the most famous haunted cemeteries in America. It is not just ghosts that have been sighted here, but a whole phantom house! In the 1970s dozens of eyewitnesses claimed to have seen a white farmhouse appearing at various locations alongside the woodland trails. The house was said to even have a glowing light in the window. Evidence of house foundations have been found in the woods, proof that homes did exist here in days gone by.

Another resident ghost of Batchelor’s Grove is the White lady or Madonna who is said to be searching for her lost infant. The White Lady ghost was supposedly captured on infrared film in a now very famous photograph. More legends surround the cemetery pond where mobsters are believed to have dumped their victims during the roaring 20s.

Do you know of any spooky buildings or weird and wonderful happenings in your neighborhood? If so drop us a line in the comments box below, we love a good ghost story!

David Wilson is a travel writer and advisor covering all US states.

Monk’s castle is a spooky one too! Popular with the teen crowd to drive west past Palos Park near the Girl Scout camp, I believe.

Google the Abbley house in Scales Mound I'll. I live by it it is very dark place along with crazy tunnels to get there and 5 mysterious deaths in the home. Story of greed and lust and innocent children caught in middle of.

Many years ago I and my buddies would go to Batchelors Grove to drink, we use to take one friends dads station wagon, the final and last time we drove into the area, we were stopped by the old caretaker who came from the old white cottage and waved us out with his shotgun, needless to say we got out of there really quick, none of us went back, due to the Vietnam war we lost track of one another. Today my wife and I will drive past it,and the roadway we use to take is closed.

Wow! I’ve been there twice! love that city (its one of my favorites ? ), but definitely hadn’t heard some of those things before! it definitely has some potentially creepiness to it.

I love haunted houses! This one looks eerily fun. I wanna go!