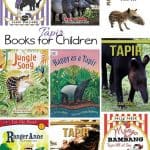 These Tapir Books for Kids are sure to please and fascinate your children as they learn all about this awesome Rainforest Animal.

These books contain so much information about the Tapir as well as stories about people from the Rain Forest.

The following tapir books for kids cover all aspects of the home-school education coin – from picture books to workbooks; from learning to read up to chapter books! 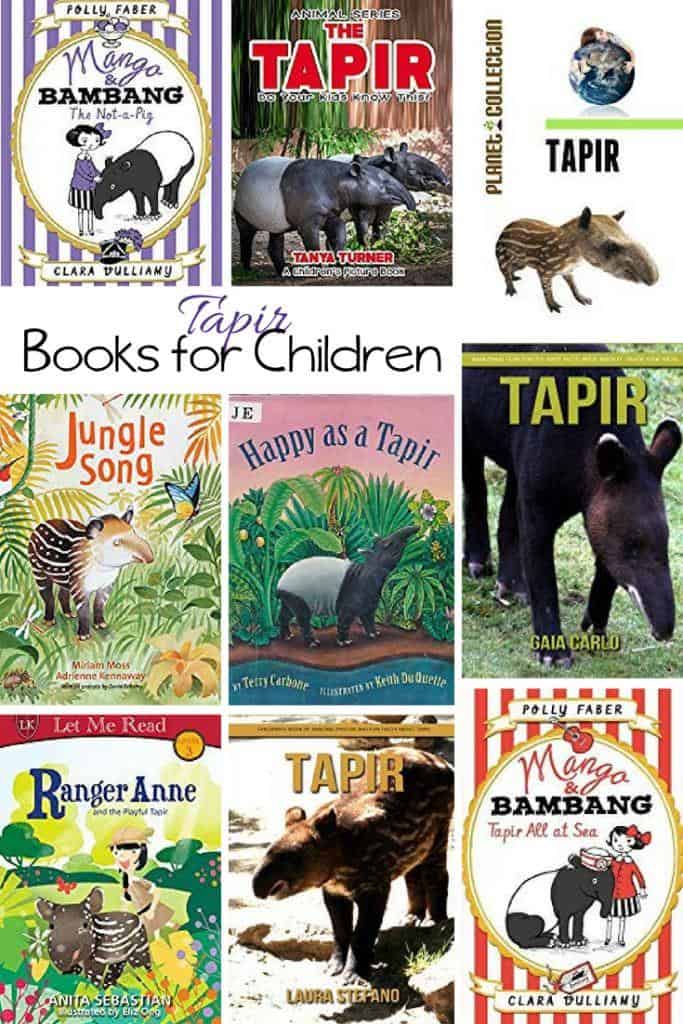 The following tapir books for kids are all available at Amazon.  Simply click the book image (aff link) to be taken there.

Gordon and Tapir by Sebastian Meschenmoser, tells the comical story of odd-couple housemates (a particular penguin and an untidy tapir) and has been short-listed for the German Children’s Book of the Year Award.  This is a fun story that you simply must include in your collection of tapir books for kids.

If you are not familiar with the Tapir, you will probably think that it’s a strange-looking animal. It somewhat looks like a pig, a cow, and even an elephant. This species is actually related to donkeys and zebras, but they are more closely related to horses and the rhinoceros.

Little Tapir is sleeping next to his mother when he is woken by Spider and led deep inside the jungle following the beat of Spider’s song. Monkeys, firebirds, snakes and insects all add their own rhythms to the music but when the beat stops and Tapir is all alone, he realizes how dangerous the jungle can be. But Mother Tapir is there to save the day.

Tapir: Amazing Fun Facts and Pictures about Tapir for Kids

EYEDISCOVER is an exciting fusion of print, video, and audio, designed to engage children at the kindergarten to grade 2 levels in a fresh new way. Each optic readalong in this collection pairs the tactile experience of printed tapir books for kids with interactive online content that truly brings each page to life.

Mango Allsorts is good at all sorts of things, not just karate and chess. Bambang is most definitely not-a-pig and is now lost in a very busy city. When the two unexpectedly meet, a friendship begins. Bambang requires a great deal of coaxing and comforting to help him acclimate to the big city, and Mango is just the girl for the job. But when Mango faces a nerve-racking challenge of her own, will Bambang be able to return the favor?

Tapir: Fun and Fascinating Facts and Photos about These Amazing & Unique Animals for Kids – this scientific books is a definite in your library of tapir books for kids!

The jungle is a noisy place. The elephant’s BOOM, the rhino’s BAM-BAM, the hornbill’s CAW-CAW and the ape’s HOO-HAA. But Tapir and Little Tapir don’t make a sound. They tiptoe through their days — until the morning a hungry leopard forces them to run for the lives. Leopard is just about to pounce when BANG! The sound of a hunter’s gun stops all three animals in their tracks. Now Leopard must flee — very quietly, with help from the tapirs.

Ranger Anne has one of the best jobs in the world she takes care of animals and plays with them! How amazing is that? Tabitha is a baby tapir. She looks very different from her mother! Ranger Anne likes to observe the tapir family.

If you’ve never seen a lowland tapir, you’re not alone. Most of the people who live near tapir habitat in Brazil’s vast Pantanal (“the Everglades on steroids”) haven’t seen the elusive snorkel-snouted mammal, either. In this arresting nonfiction picture book, Sibert winners Sy Montgomery and Nic Bishop join a tapir-finding expedition led by the Brazilian field scientist Pati Medici.

Tapir Visits a Foster Family is the first in a series about Tapir and his adventures as he learns about foster care. Tapir is an animal character and program created by Jillayna Adamson to help younger children transition into the foster care and/or adoption system.

** For Kids Only** Written in a simple Language that Kids will understand.

An amazing children’s book on Tapirs. The pictures are great and the information herein is awesome for kids of 4 and Up!

Book Two in this charming and beautifully illustrated series about the unlikely friendship between Mango, a little girl, and Bambang, a tapir. Mango and Bambang’s adventures continue in the second book of this charming illustrated series about a little girl and a tapir, written by Polly Faber and illustrated by Clara Vulliamy. Mango Allsorts is a girl good at all sorts of things, especially helping a tapir feel at home in a busy city.

At a strange zoo in which the zoo creatures gather together twice a year to change animal suits, a young tapir is told that he cannot trade until he learns to be a better tapir. Jr Lib Guild.

Introduces South American tapirs, describing their physical characteristics, habitat, life cycle, and how they protect themselves from predators.

A look at tapirs, including their habitats, physical characteristics such as their prehensile proboscis, behaviors, relationships with humans, and the vitality of this umbrella species to its forest ecosystem today.

As a part of the Planet Collection, “TAPIR” offers facts, descriptions and thought inspiring questions alongside amazing photographs of the different tapir behavior.

Toddlers and babies will love looking at the photos, while the older children will be able to grow their minds through reading the passages.  This is one of my favorite tapir books for kids!

Learn how a nose transforms an identity and a friendship for one of the most unique creatures in the animal kingdom. Published by the nonprofit organization Dot-to-Dot Children’s Books, a minimum of 15% of your purchase will go to supporting Water For People’s efforts to help communities in Bolivia. 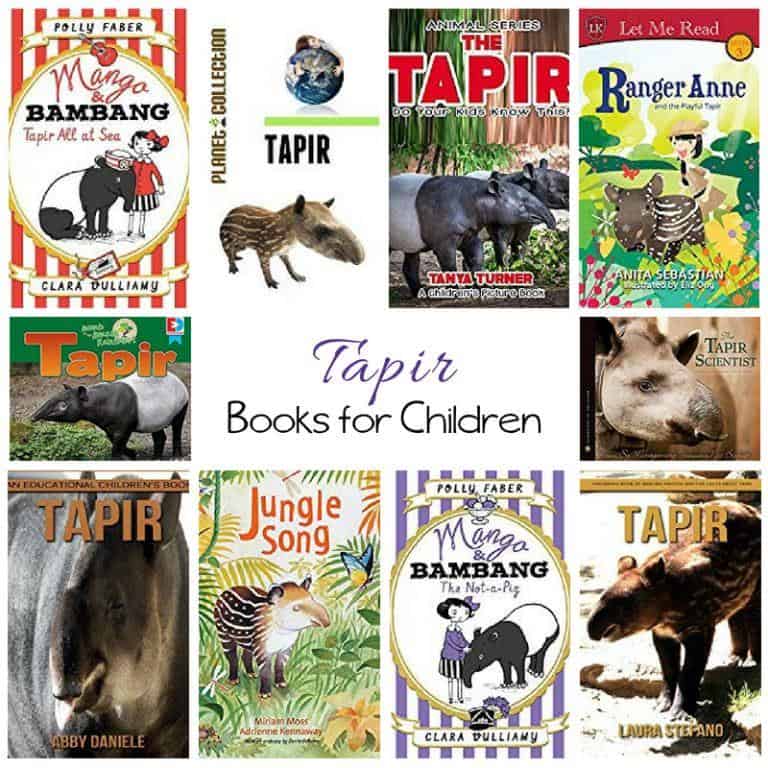