The Seventies are memorable in the minds of today as a time of “free love” and Disco.

With many Wars being fought around the world (including Vietnam!) and Watergate, it was a time of true conflict and the youth of the time just wanted to “make love, not war” in many rebellious acts known around the globe!

But, fighting and hippies aren’t all the 70s were about!  Equality was a huge part of the 70s from Youth Suffrage (lowering the voting age from 21 to 18) to Civil Rights, to Feminism.

However, even with all the politics and conflict going in around the world, the movie makers of the time were busy cranking out make-believe for our youth!

The following list of Kids Movies of the 1970s are some of the most popular and memorable children’s movies of the decade and make a perfect movie library for you and your kids! 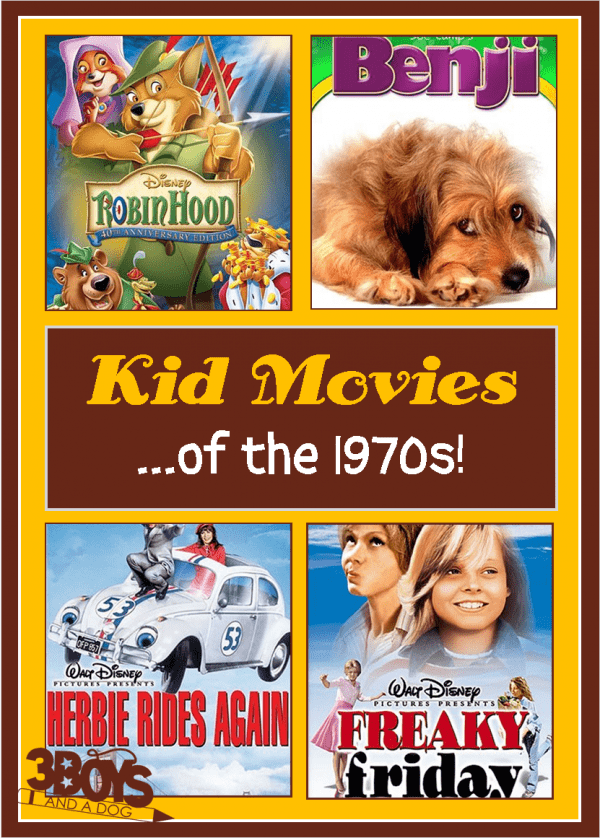 The movies were AMAZING!  Many have been remade today and many Disney Movies from the Seventies are ones you can find within Disney World from some of their older rides to some of the icons around the parks.

1970 – The Aristocats – Everybody wants to be a cat! Disney’s unforgettable classic THE ARISTOCATS swings like never before in high definition. Share all the heart, humor and irresistible music with your family in this jazzy Special Edition 2-Disc Combo Pack! In the heart of Paris, a kind and eccentric millionairess wills her entire estate to Duchess, her high-society cat, and her three kittens. When her greedy, bumbling butler attempts the ultimate catnap caper, the rough-and-tumble alley cat Thomas O’Malley and his band of swingin’ jazz cats must save the day. It’s the purr-fect blend of comedy and adventure.

1971 – The Cat in the Hat – In a marvelously animated version of one of the most beloved of all Dr. Seuss tales, two youngsters find themselves at home with nothing to do on a rainy afternoon. But when the magical, mischievous Cat in the Hat arrives on the scene, they’re all cat-apulted into a day of rousing, romping, outlandish antics they – and you – will never forget!

1971- Willy Wonka & the Chocolate Factory – A poor little boy wins a ticket to visit the inside of a chocolate factory. When he experiences the wonders inside the factory, the boy discovers that the visit is a test of his character.

1973 – Robin Hood – To commemorate its 40th anniversary, Disney proudly presents the unforgettable animated classic ROBIN HOOD on Blu-ray for the first time ever. Experience all the fun, thrills and celebrated music of this legendary adventure with perfect picture and sound! Join Robin Hood, his trusted companion Little John and his hilarious band of Merry Men as they outfox greedy Prince John to save the good people of Nottingham. Dashing from one daring deed to the next, Robin won’t rest until he wins the hand of Maid Marian and restores King Richard to the throne. 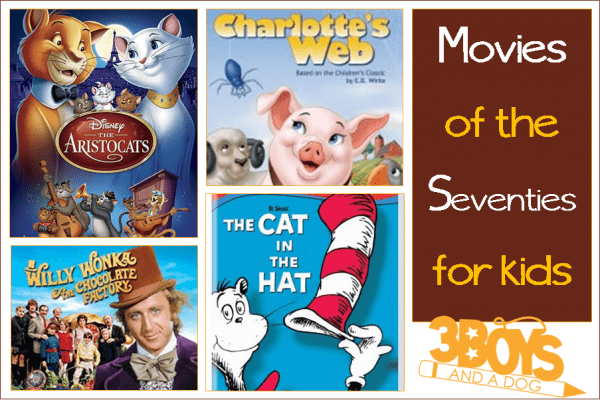 1974 – Herbie Rides Again – Herbie is back in gear — revved up and ready for more madcap comedy adventure in this sidesplitting sequel to Disney’s popular smash hit, THE LOVE BUG! This time Herbie’s leading lady is award-winning actress Helen Hayes, superb in the very first screen comedy of her illustrious career. Aided by co-stars Ken Berry and Stefanie Powers, she’s out to save her beloved Victorian firehouse home from the wrecking ball of greedy real estate tycoon Keenan Wynn, Disney’s most lovable villain. It’s up to Herbie and his bug battalion to “come through in the clutch”! Fasten your seatbelts and get ready for a really great time!

1976 – Freaky Friday – Now experience all the laughs of the original comedy classic that inspired Disney’s hilarious hit remake. Trading places was never so funny, and it could only happen on Friday the 13th! That’s when the tomboyish and free-spirited Annabel (Jodie Foster) switches bodies with her straitlaced mother, Ellen (Barbara Harris), and suddenly finds herself responsible for running the entire household. In turn, Ellen, now in her daughter’s body, faces the daunting challenges of school, including a typing test, field hockey competition, and much more!

1977 – The Rescuers – From Walt Disney’s original team of legendary master animators who brought you THE JUNGLE BOOK comes a thrilling adventure and timeless tale overflowing with action, suspense, and extraordinary little heroes you can’t help but love! Join the shy but brave mouse Bernard and his glamorous partner Miss Bianca — two tiny heroes on a great big mission to save a young girl named Penny who has sent an urgent call for help! Taking off on the wings of their trusted albatross friend Orville, Bernard and Bianca soar to the marshy swamp of Devil’s Bayou. There, they find themselves on the riverboat hideout of the hilariously evil Madame Medusa, who needs Penny to retrieve the world’s largest diamond! But before Bernard and Bianca can bring Penny safely home, they’ll have to enlist the help of some spirited local swamp critters in order to outwit Medusa … and outrun her pet crocodiles Nero and Brutus.

1978 – Superman – Director Richard Donner brings the legendary character Superman to the big screen, with Golden Globe-nominee Christopher Reeve as the Man of Steel.

1979 – The Black Stallion – From its turbulent beginning in a storm-swept sea to its unforgettable horse race finale, The Black Stallion is a modern-day movie landmark. One of the most highly praised productions of 1979,it is “a wonderful experience…for adults and for kids” (Roger Ebert). When a shipwreck leaves Alec (Kelly Reno)a courageous young boyand The Blacka wild Arabian stallion ‘stranded on a desolate island, the two share a frightening adventure of survival that forges a lasting bond of friendship between them. Upon their rescue, Alec and the magnificent horse continue their adventures when they join forces with ex-jockey and horse trainer Henry Dailey (Mickey Rooney). Recognizing the winning combination of The Black’s remarkable spirit and Alec’s unwavering devotion tohis friend, Dailey takes both under his wing and prepares them to go head to head with the world’s best thoroughbreds in “the race of the century.”

More Kid Movies Through the Decades!

I thought the movies on this list were good but you missed Star Wars and Jumanji.