What’s the one thing you remembered when you were little? Was it playing with a certain toy? Or was it having fun and using your imagination? What do you do with that big box? That’s the number one thing that I loved about Doc McStuffins; it encourages imagination! About Doc McStuffins Time For Checkup:

“It tells the story of a nurturing six-year-old girl who heals stuffed animals and broken toys out of her backyard playhouse clinic.  Assisting Doc at the clinic are her trusty team of lovable stuffed animals including: Stuffy, an overly proud dragon; Lambie, her  cuddly best friend lamb; Hallie, a jolly and caring  hippo nurse; and Chilly, a snowman who spends a lot of time getting check-ups at the clinic.  Whether it’s a case of loose stitching, low batteries or a blow-up toy who has sprung a leak, Doc and her pals are always there to lend a helping hand, while imparting to young viewers the importance of taking care of oneself and others.” 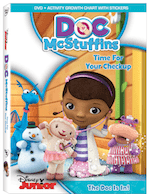 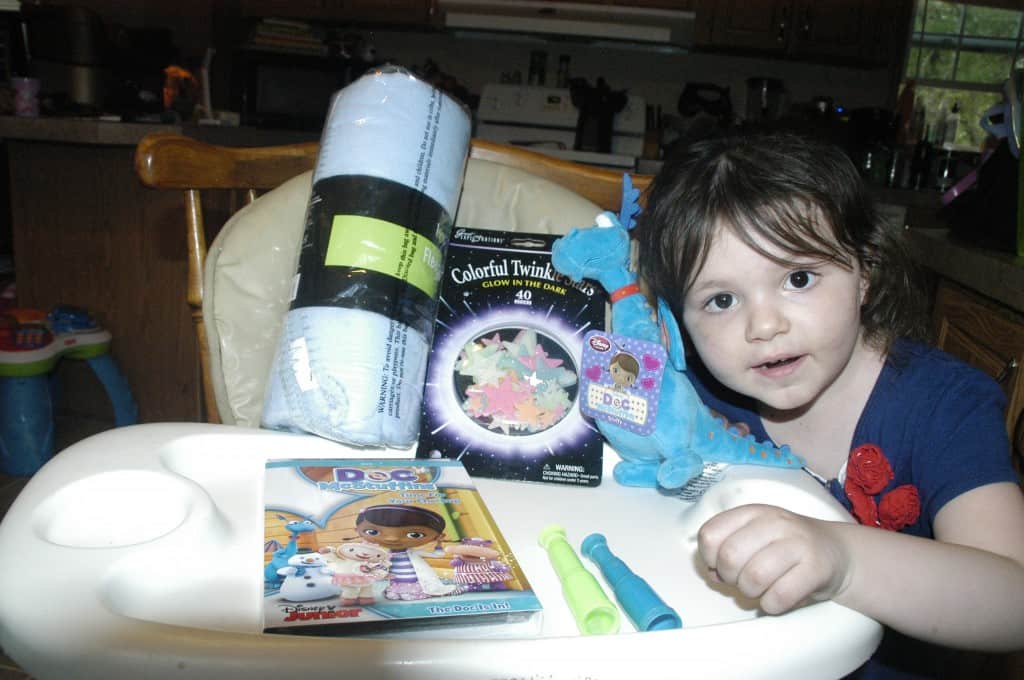 My Thoughts:
My kids(especially the girls) were on cloud 9 getting the Doc McStuffins package. Not only did it contain the DVD but also a party pack! The party pack included a lot of fun activities for them to do to go along with their favorite show Doc McStuffins! I had a lot of house work today to get prepared for the weekend. So I thought it was a perfect time for me to pop out the DVD. Both my 21 month old and 4 year were glued to the couch the whole time! Not a peep was made from them. I would have to say my daughter’s favorite episode was the Tea Party Tantrum/Blast off!.  She just kept asking me, “Mommy can we do a tea party!”  My youngest loved Star Blazer Zero! She kept saying blast off over and over again! As I mom I loved the secret meanings behind this DVD! It teaches them about friendships and healthy habits, but in a way that it’s fun for them!
After the movie was over and my chores were done I broke out the activity kit!! Boy was Zoey pretty excited!! The kit came with several coloring sheets, things to build a play house, Stuffy the dragon, two telescopes, blanket, glow in the dark stars, and some activity work sheets. Zoey’s favorite part was the color sheets and building a play house. Carly’s was Stuffy. She kept pointing at Stuffy then pointing to the t.v. I think she was a little confused how he got in his hands!! If nothing else, it leaves her some room to use her imagination!
Disclaimer: I received a copy of Doc McStuffins: Time for Your Check Up! on DVD in exchange for this post. All opinions are my own.

Jacqui Odell is a stay at home mom of three. All under the age of 5. She was looking for a hobby and started blogging. She has been blogging for seven months at http://womanofmanyroles.com/ and really enjoys doing it! Jacqui is passionate about finding and learning about things that are the best for her little ones!