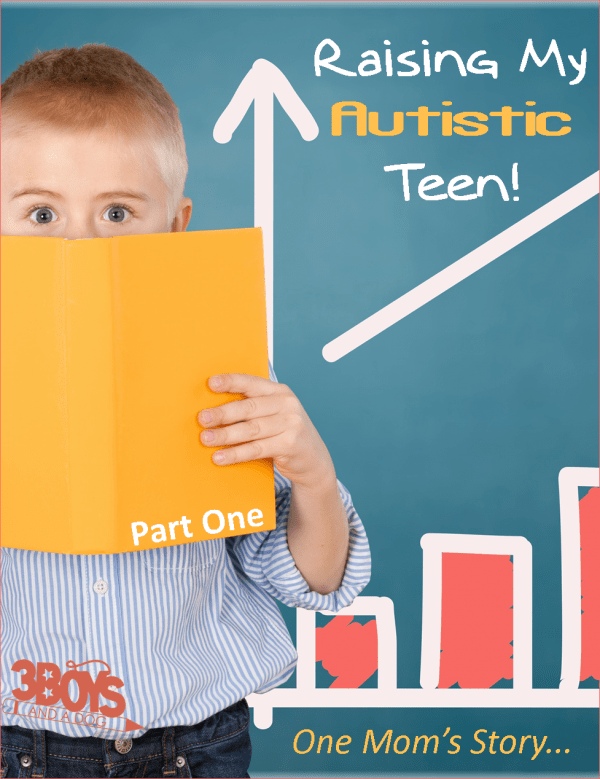 Tripp will be 16 on November 9th.  About 8 years ago, he was diagnosed with a whole stream of “Letter Disorders” all adding up to one main thing… Autism Spectrum.  When we got the diagnosis, Ricky refused to believe it.  I, on the other hand, was extremely relieved to have my fears confirmed – relieved to have a name for the issues my child faced every single day.  I am a researcher, I basically already knew what the outcome of yet another doctor visit was going to be.  However, Ricky is a Special Ed Teacher.  For him, Autism is Rain Man and Tripp is certainly not Rain Man!

I saw the signs when he was VERY little.  Before he showed that he could even pull up, he somehow managed to fall out of his Baby bed!  We don’t know how, we will never know how.  But, unless a ghost picked him up and tossed him on the floor, a child that was much too young, fell out of his crib.

When he was 10 months, he still wasn’t crawling.  He never once crawled.  He rolled where he needed to go.

When he turned exactly 11 months, he stood up and walked across the room.  He didn’t toddle, and he never scooted or crawled.  He all of a sudden, stood up, and walked where he wanted to go like he had been walking for years.

When he was about a year and a half, he started screaming and crying on our way to his Nana’s House.  SCREAMING, blood curling, chilling screams.  He literally sounded as if he were being bludgeoned to death.  Why? Because we had told him we were going to Nana’s. However, we wanted to ride by a house that was for sale, so we went around the block to approach her house from the opposite way.  This was NOT the way to Nana’s. He didn’t understand what was happening, but we were going the wrong way and it was a problem.  He was young.  It took a bit of work from me to figure out why he was so upset.  We both learned something that day.  He learned that there is more than one right way to do something.  I learned that if things are not done the “right way” it could be a potential for disaster.

When he was 2, he had somewhere around 100 hot wheels and matchbox cars.  He would line them all up, side by side, in a perfect line, all facing the same way.  We didn’t know why.  We thought it was a funny little thing he did when he played.  We would flip one of the cars around when he was off doing something else.  He would casually walk past the line and scream – the more we did it the more upset he got by it.  Then, he would flip the car back, straighten everything back up, and carry-on with what he was doing. We were young, we thought it was funny. Now I know that order is necessary in his life.  Without order, it is like having a rock in your shoe.  The more you walk on that rock, the worse it feels.  The harder it gets to walk.  The longer he has to deal with things not being “right”, the harder it is for him to deal with daily life.

I could go on and on. Until you live it, you have no clue!  As hard as being a parent is, it is a million times harder when you can’t help your child.  I think the hardest part is not dealing with meltdowns, but dealing with his feelings when “stupid” people bully him.  The hardest part is not being able to make the general public understand the amazingly loyal and loving person that he is when things are all “in the right order”.  Tripp is smart.  Tripp is SCARY SMART!  Tripp is Sheldon (Big Bang Theory) and Walter (Scorpion) smart.  Add a super high IQ to ASD, ODD, ADD, OCD, among others and you have one awesome kid.

As a teen, his mantra has become People bother me. Stupid People REALLY bother me! Click to Tweet

He is older, life is easier.  He still has breakdowns, but WE are better parents to him now.  We know more about how he thinks and feels.  We understand more about the signs of a breakdown.  We know when things are coming.  We know not to get frustrated, but to remain calm.  We know that when he is upset (what a nice way to say it) we can’t talk it out.  He needs to “get over it” on his own terms and then we can discuss what happened and give tips for dealing with it a little better.  He is older, he can now tell us what he needs.  Now, he can say, “I need to be alone”.  We don’t think he is being rude or disrespectful anymore.  Quite the opposite… we know he is being very respectful.  He is basically saying, “I am ready for a psychotic break.  It is coming, there is nothing I can do about it, and I really need this meltdown to get my mind back on an even keel.  Leave or fear for your safety!”

One thing we have learned over the past few years.  Physical activity helps.  Not just ANY physical activity;  a more violent, combative, physical activity like Boxing, Wrestling, and/or Football.  He needs a place to let off steam.  To take his “always underlying anger at himself and his limitations” out on someone or something.  He can run all day long, it will tire him out.  However, it will leave all the “stuff” still there in his mind.  It has to come out.  It can come out in a crazy fit of unbelievable anger, a crying meltdown of drama queen proportions, an act of physical violence towards himself or someone else, among many other things.

Have you ever been so mad at someone that you were crying and shaking and knew if that person where in front of you that you would punch them straight in their face?  Where you maybe knot your hands up in your hair because even with all the anger, you have no medical condition and you are a mature adult.  So, you groan or scream inwardly while pulling your hair to relieve some of the tension and anger you feel?  Imagine living every moment of every single day in that state of frustration and confusion!

Imagine trying to control all of the little things when you are mad about the big thing.  You can’t, right!?  When you are upset or annoyed, all the little things bother you.  Imagine what life would be like for you if you had to live in a constant state of being upset or annoyed.  Tripp does.  He does it every single day.  Amazingly, he does a bang-up job of controlling himself.  We, as his parents, get so frustrated when he has a meltdown but we have to remind ourselves of all the moments he hasn’t had one.  He is growing even more as a person and it amazes me.

I am so very proud of him.  I am proud of what he has accomplished. I am amazed at how far he has come.

I have so much more to say – this isn’t a tips post.  This is a post to all those that have been there, might be there, or to those Moms with little ones they are just learning about.  It gets better.  Your child will be able to function as a normal tax-paying adult one day.  Your child will ALWAYS struggle with this disorder.  Nothing cures it, nothing gets rid of all the symptoms, nothing will re-wire the brain.  However, with love, understanding, and patience, your child will grow into an amazing Adult.

Wow! I needed to read this from someone who is living what I am living right now. My son has not been diagnosed with autism only with ADD;however, he has so much of the same qualities of your son. I just needed to read that he will be okay as he grows up. There are days when I have questioned how on earth he is going to function as an adult in society with all of his emotional meltdowns. I would like to understand how to deal with him better. Right now, I feel like the biggest failure. :(

When Tripp was very little, we worked very hard to teach him to count to 10 before getting upset and we would start slowly and quietly counting for him. This worked so well because it not only gave him a chance to calm down, but us as well :-)

I am so glad you wrote this. I'm sure it was good therapy for you and encouraging for other parents. It also, helps the rest of us understand better. The bullying is hurtful and as a parent I have dealt with this as well.. Many Blessings to you and your family.

It was good therapy and I have more to get out of my head :-) Thanks so much for your encouraging words!

I felt like I was reading my son's story. Your son is wonderful. He is doing so well. My son is now 31. He grew up before there was an autism spectrum or he would have been on it. But the alphabet soup of your son, he was diagnosed with them all. Like I said, he is now 31. He has been married for 7 years. He loves his job and everyone there tells me how much they love him. And mostly it's because of all of the special traits he has that make him do his job so well. Plus, he treats all people the way he wants to be treated. You are right, it can't be cured and won't go away but they can live so well if we give them a good start in life.