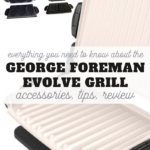 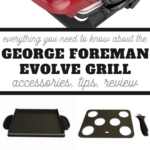 The George Foreman Evolve grill is one of my most used kitchen appliances.  It’s easy to use, easy to clean, and versatile thanks to the interchangeable plates.

The Evolve grill is similar to older indoor grill models in that it cooks from the top and the bottom for faster cooking.  It lets the fat drain off, so your food has less fat and fewer calories from fat.

Unlike previous models, however, this Evolve features a set of interchangeable plates.  Simply remove the plate, and your grill becomes a griddle, waffle maker, or muffin maker.

With the versatility of this grill, I can replace several of my appliances.  It’s convenient, easy to use, and saves me money.  The grill uses less electricity than an oven, and it doesn’t heat up my kitchen like my oven does.

What is the George Foreman Evolve Grill System?

Unlike older George Foreman grill models and the less expensive indoor grill models, the George Foreman Evolve Grill system has removable plates.  Additionally, you can buy different plate styles to turn this into a multi-function cooker.

The following plates either come with the grill or are available separately:

You can buy the grill with just the grill plates, and some models also have either the waffle plate or the muffin pan included.  The other plates are available separately.

All of the plates and dishes are removable and dishwasher safe, so it makes clean up a breeze.  They have a cool touch release, you can remove the plates safely while they are still warm.

The plates have premium ceramic coating and are not coated with Teflon.  The non-stick coating on the Evolve grill, and other George Foreman indoor grills, is a non-reactive and non-toxic material that was designed just for these grills.

The coating that they use is durable and won’t scratch with standard use.  The plates should last for several years with proper care.

Why I Love The George Foreman Evolve Grill

I was drawn to the Evolve because of the versatility.  Instead of having several small appliances, I could use just one to grill, make waffles, and use as a griddle.

Although I didn’t buy it for the muffin pan or baking dish, those have been very handy.  It’s convenient to use my Evolve indoor grill in the summer because it doesn’t heat up my kitchen as my oven does.  The George Foreman Evolve grill also uses less electricity, so it’s cheaper to use than my oven.

How to Use George Foreman Evolve Grill System

The George Foreman Evolve grill system is easy to use.  On the front, there are several buttons.  There is a power button, temperature and time button, up and down buttons, and a sear button.

Simply power it on, set the temperature and time using the up and down arrows, and let it heat up.  For convenience, the recommended temperature and cooking times for common foods are printed on the front of the lid.

To sear your food, set the temperature for the food that you are cooking.  Then press the sear button and wait for it to heat up.

Once the temperature stops flashing it is ready.  Then place the food on the grill, and it will sear for 90 seconds.  The grill will then drop back down to the cooking temperature that you set it at for cooking.

When you are done cooking, let the plates cool slightly and remove the plates and wash them or put them in the dishwasher for easy cleanup.

How Long to Heat Up George Foreman Grill

The George Foreman Evolve grill takes approximately three to five minutes to preheat.  It’s important to note that the grill does not have a countdown for time until preheated, and you will have to start the timer when you place the meat on the grill.

How Do You Know When the George Foreman Grill is Ready to Cook?

How long to cook on George Foreman grill depends on what you are cooking.  The infood grill does not get as hot as an outdoor grill, so keep that in mind.  However, the grill does heat from the top and the bottom, so cooking times are often lower than cooking on an outdoor grill or in a pan on the stove.

The cooking time depends on the thick cuts of meat and the size of the food.  Always check meat with a thermometer to be sure that it is cooked to the recommended temperature.

The following are suggested cooking times:

What Can You Make on a George Foreman Grill?

The George Foreman Evolve grill can be used for many types of foods, including meat, seafood, chicken, and vegetables.  The grilling surface gives a lot of varied options.

With the ceramic grill plates, you can use it for chicken, hamburgers, pork, steak, bacon, seafood, and vegetables.

With the griddle place, you can cook potatoes, pancakes, fresh toast, and bacon. The nonstick waffle plate is great, too.

Since this grill also plates and pans for muffins and for baking, you can make several more types of foods in this model.

Can I Cook Asparagus on a George Foreman Grill?

Yes, you can cook asparagus on a George Foreman Grill.  Grilled asparagus is an excellent way to cook this vegetable because it brings out the flavor.

Simply coat the asparagus with olive oil, salt, pepper, and garlic to taste.  Then grill for 5 to 8 minutes.

Do You Flip Burgers on George Foreman Grill?

No, you do not have to flip burgers on a George Foreman grill.  The grill heats from the top and the bottom, so you can let them cook undisturbed.  This helps to accommodate thick cuts of meat as well.

The ceramic plates heat evenly, so the entire cooking surface will heat to the same temperature.  You should not have to flip or move the hamburgers for even heating.

PRO: The heating element below the plates is larger on this model than on some of the previous models, so it provides more even heating.  The ceramic in the plates is an excellent heat conductor, so the plates heat and you do not have to flip or rotate the food.

PRO: Even though the heating element is in the center, all of the edges heat just as well as the center.  This helps your food cook at the same pace, and it prevents burning or uneven cooking. This gives an adjustable cooking angle, too.

PRO: The plates have a special coating that is found only on George Foreman grills.  The coating is non-toxic, and they are not coated with Teflon, which has been known to release toxic chemicals into the air at high temperatures or when it breaks down after use.

As much as I enjoy this indoor grill, there are a few drawbacks.

CON: The timer and the temperature control are independent.

This means that the timer does not count down the time until it is finished preheating.  If you set the time when you turn it on, the timer also includes preheating time.

CON: The unit does not shut off when the timer is finished.  You will need to manually turn it off to avoid burning your food.

Indoor grilling is convenient, especially in the winter or when it’s raining, but not all indoor grills give foods the same flavor as outdoor grills do because they can’t sear the food.

The Evolve has 500 degree searing, so you can sear your foods for 90 seconds before cooking.  Searing foods caramelizes the natural sugars and browns the proteins, which gives the food a brown crust and enhances the flavor of the meat.