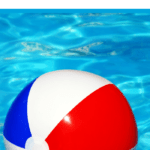 If you’re looking for some fun and unique August Baby Shower Ideas, you’re about to be “wowed”. All of these great ideas are super fun ways that you can add some uniqueness to your upcoming baby shower!

Who says that you have to have a “typical” baby shower? You know what I mean, right? Blue, pink, jungle animals…while all those baby shower ideas are cute, they’re all done a lot of times by other moms-to-be.

Why not take charge and do your own baby shower and turn in into something cool and fun?! Having a baby shower during August means one thing, and one thing only…pool party baby shower!

If you’re lucky enough to have an August baby shower, there’s just one idea that makes total sense! Why not have an epic baby shower pool party with all of your family and friends? If you happen to have your own pool, awesome! And if not, see about renting out the pool for a couple of hours in your town. Talk about a fun and unique way to make a really big “splash!”

Plus, when you’re having a pool party baby shower, it’s a lot of fun to decorate. If the mom-to-bed is having a baby girl, you can go all pink themed, girly fru-fru, with floral arrangements EVERYWHERE.

You could even give tiny plants as party favors. How fun would that be for friends and family? A little cactus in a sand pail…

If you are going with a more boy baby shower, you don’t have to forsake the flowers, just go with more gender appropriate colors like blues or just greenery for a more gender neutral color scheme.

Check out these super cute floating roses! They just add a touch of elegance and fun and make it look like you put in a ton of hard work when in all reality, you didn’t!

No August baby shower would be complete without some delicious food options. While some people prefer a sit-down meal, sometimes it’s just simple to find a finger food route that is less work and less clean up. And with this long list of finger food options, you can rest easy knowing that you’ll have a ton of variety for everyone at your shower.

One fun idea to keep in mind is welcoming your little “baby shark” into this world. A sun baby shark-themed baby shower in August can be so much fun! Not only will every single child at the shower know that Baby Shark song, but you can make some super adorable shark cupcakes that are certain to be a hit.

Keep in mind that since August temperatures are typically hot, you’re going to want some delicious drink options to have on hand.

Water bottles and chocolate milk are always fun to have for those “grab and go” type guests, but most people also love to have some tasty punch options on hand as well.

And don’t shy away from making the punch! The recipes are so simple and easy that you could probably have several different punches to taste test.

Just don’t forget to add in some delicious desserts, drinks, and foods for all your guests. While they’re there to celebrate the upcoming birth of your child, they’re going to be wanting to feed their tummies and mouths as well!

Ok, ok, a pool party isn’t the only idea I have for you if you are hosting a baby shower in August…. best one, but not only. LOL! Here are a few of my baby shower theme ideas. 🙂

What I think I like most about having an August baby shower is that you can have so many different themes! What will set apart your baby shower from those of others is how unique you want it to be!