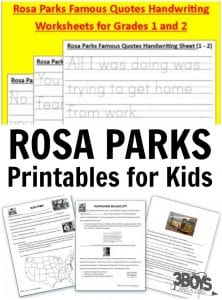 Rosa Parks is often considered as one of the mothers of the American Civil Rights Movement. Her refusal to give up her seat on the bus to a white passenger led to the Montgomery Bus Boycott and became a pivotal point in the use of civil disobedience as a form of protest. Learning about Rosa […]