Presidents’ Day is Monday – what better way to celebrate than to learn a bit about some of our Past and Present Presidents?  This list of Movies about the Presidents for Kids will help teach a bit without the children thinking you are expecting learning on the weekend or a Holiday! 😉 Yes, I am sneaky like that! 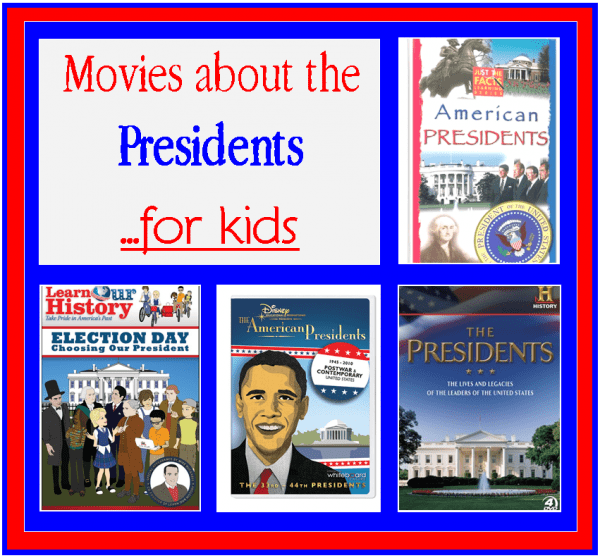 According to History.com – Presidents’ Day is an American holiday celebrated on the third Monday in February. Originally established in 1885 in recognition of President George Washington, it is still officially called “Washington’s Birthday” by the federal government. Traditionally celebrated on February 22—Washington’s actual day of birth—the holiday became popularly known as Presidents’ Day after it was moved as part of 1971’s Uniform Monday Holiday Act, an attempt to create more three-day weekends for the nation’s workers. While several states still have individual holidays honoring the birthdays of Washington, Abraham Lincoln and other figures, Presidents’ Day is now popularly viewed as a day to celebrate all U.S. presidents past and present.

Movies about the Presidents for Kids

This list of Movies about the Presidents for Kids is actually very important have in your collection or rent.

1.  You will learn each president’s political affiliation, state of residence, term in office; their birthplaces, homes, and burial sites. And of course, the major political, economic, domestic and foreign issues of each president are explored, as well as their major achievements and disappointments.

The Presidency of the United States is the most powerful position in the nation, and is often referred to as the “leader of the free world”. Their power is only equaled by the massive responsibility they hold. They are not always perfect, but their stories are always fascinating.

The ‘Just the Facts’ Learning Series brings facts and information straight to your TV in an appealing way that makes learning compelling and fun to watch!

2.  In this exciting film from Learn Our History, you’ll join the time traveling kids as they go back in time to discover how America’s presidential election process came to be. Along the way, you’ll learn all about how the Electoral College works, the role of primaries and caucuses, the nomination process, plus the importance of presidential debates and the party conventions.

3.  Each DVD includes short-form Presidential biographies, era overviews for historical context, and thematic segments such as The Making of the Presidency and We the People. The DVD content is based on National Curriculum Standards and features interviews with political luminaries such as Sam Donaldson, Wesley Clark, Paul Begala, Melissa Harris-Lacewell and many more. Try the interactive whiteboard content on every DVD it s an exciting, competitive game that uses video clips, photographs and quotes to test students understanding of the Presidents, their political positions, and why they matter in the American story.

This volume covers the 12th-25th presidents!

4.  The last in a 4-part series, this DVD includes short-form biographies of the 33rd-44th United States Presidents–beginning with Harry Truman and the country’s postwar economic recovery efforts to the incumbent Barack Obama. The educational feature The Presidency and the Economy explores the important role the President and Federal Government play in managing our nation’s financial health. The DVD features interviews and insights from political experts and commentators like Melissa Harris-Lacewell (Associate Professor of Politics and African-American Studies at Princeton University), Paul E. Begala (Former White House Aide), Mo Rocca (Political Commentator), Sam Donaldson (News Anchor) and many others.

5.  Each DVD includes short-form Presidential biographies, era overviews for historical context, and thematic segments such as “The Making of the Presidency” and “We the People”. The DVD content is based on National Curriculum Standards and features interviews with political luminaries such as Sam Donaldson, Wesley Clark, Paul Begala, Melissa Harris-Lacewell and many more. Try the interactive whiteboard content on every DVD — it’s an exciting, competitive game that uses video clips, photographs and quotes to test students’ understanding of the Presidents, their political positions, and why they matter in the American story.

6.  American history is so much more than dates and documents–it’s the dynamic story of the real men and women, immigrants and Native Americans, who together built our country. Disney’s The American Presidents is a fresh and relevant narrative (developed with the former producer of The Daily Show and The Colbert Report about the people who led this country through change–from an early idea of democracy to our first African-American President. The third in a 4-part series, this DVD includes short-form biographies of the 26th-32nd United States Presidents–beginning with Theodore Roosevelt and the anti-trust movement to WWII President Franklin D. Roosevelt. The educational feature The Presidency in Wartime explores the past and present wartime powers of our Commanders in Chief.

7.  From 1789 to today, THE PRESIDENTS collection gathers together vivid snapshots of all Commanders in Chief who have guided America throughout its history – their powerful personalities, weaknesses, and major achievements or historical insignificance. Based on the book To the Best of My Ability, edited by Pulitzer Prize-winner James McPherson, THE PRESIDENTS features rare and unseen photographs and footage, unexpected insight and trivia from journalists, scholars, and politicians such as Walter Cronkite, David Brinkley, Wesley Clark, Bob Dole, and former President Jimmy Carter. Viewed within the changing contexts of each administration, the Presidency has never seemed more compelling and human.

8.  America’s unique form of democracy separates power among three branches of government: the legislative judicial and executive. The President of the United States who heads the executive branch holds the position that most embodies the aspirations of the American people. Join HISTORYr for a fresh perspective on how the Oval Office has evolved over the past 200 years through stories about and learn about the 43 men who have served as Commander-in-Chief — from George Washington to Barack Obama. This 8-hour miniseries concentrates on the ebbs and flows of presidential power and responsibilities as each of America’s leaders deal with the events expectations and challenges of his time.

9.  This video version of author/illustrator Mike Venezia’s popular children’s book outlines the life and career of America’s first President. Everyone knows Washington as the hero of the Revolutionary War…but do you know why he turned down the chance to be King of America? What was his first job at the age of 16? Why he isn’t smiling in his most famous portrait? Sparkling animation and historical fact come together to answer these questions and many more. Children aged 6-10 (and adults too) will laugh and learn with this rollicking animated program.

I hope you and your kids have fun learning about the history of our great Nation!

[…] This is a great list of movies to watch about Presidents’ Day for kids. […]