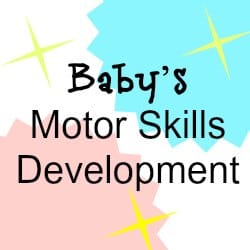 All babies are unique and develop their motor skills according to their own timeline. However there are warning signs to look for in case these skills such as sitting and crawling are too delayed and you need to seek advice from your pediatrician.

Newborn Babies to Three Months Old – at three months old your baby should be able to hold his head straight, reach for toys, turn his head to follow faces he recognises and smile. When he is on his tummy he should be able to lift his head up as he pushes down with his elbows and turn to the side.

Three Months Old to Six Months Old – during this period your baby will start to discover his environment and his own body. He should continue developing his hand control by reaching out for his toys. He should be rolling from his back to his tummy and his head should start lifting higher whilst he pushes on his extended arms so he can have a good look around. By the time your baby is five months old he should be able to sit up with his legs spread out and his arms out front to support him. Once your baby is seven months he should be able to sit upright without support once you have placed him in that position. By this age too you should notice his cognitive skills developing so he will enjoy looking in mirrors and making noises.

Six Months Old to Nine Months Old – at this age your baby will really begin to explore with all his new skills. By nine months he should be able to sit in a mixture of ways, easily moving from sitting to getting on his hands and knees. Just before he begins to crawl you should see him getting onto all fours, rocking backwards and forwards. At nine months he might be able to stand up by grabbing onto furniture but not all babies can at this age.

Nine Months Old to Twelve Months Old – at this stage your baby will consistently practise the same movements of crawling, pulling to stand and climbing which strengthens him and enhances his control so that he should soon be able to walk independently. Being able to stand and then walk are major accomplishments. Your baby may be walking when he is ten months but if even if this does not happen until he is fifteen months it is still considered normal.

If you are concerned about your baby’s motor development then ask your paediatrician for advice. Usually you will be shown how to encourage your baby to develop his skills through positioning and play.

Guest article provided by Eirian Hallinan who has written numerous articles in the baby care field. She believes in healing naturally, first, especially when it comes to infant colic.