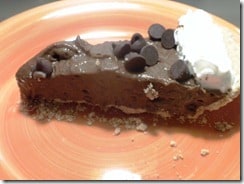 As part of Social Fabric, I was given the opportunity to finally watch The Help on rental from Blockbuster Express.  I also had to make a Chocolate Pie – because it just isn’t a good movie night without movie night snacks!  My Husband’s Grandmother used to make a yummy Chocolate Pie for every family function and no one has the recipe.  I have asked around to others (like my grandmother) for a recipe as we assume it was one of those that was passed on through the year.  Well, I looked at all the Chocolate Pie recipes that I have collected through the years and they are seem difficult.  In this day and age, who has time to spend hours making one pie?  Not me, that’s for sure.  So, I decided to search for a super good SIMPLE one that would only take a few moments.  Oh yeah, I found one!  My husband says that it is just as good as his Meemaw’s to him.  There is one person that really needs to put his mark on it as he was the one the Chocolate Pie always was made for, but I haven’t seen him yet.

See my Google+ Photo album to follow my track through Super Target and my Pie Making!

Now on to the recipe:

Mom Says about The Help:  I was so excited to watch this movie because I have heard a million and one great things about it.  My husband wasn’t interested in a “girly movie” so I called Mom and asked if she wanted a girl’s night in with me.  So, off I went to her house and we settled in.  I live in Alabama which is rich with Black History (Rosa Parks, Tuskegee, Selma, Birmingham, Mobile, just to name a few important parts of History) so I know the stories of what things were like.  My Parents were in High School in the 60s!  Mom went to Private School, so her stories are much different than Dad’s who attended Public School.  But, just hearing stories from a few White people can’t put the heartache into prospective as watching this movie did!!  I cried through most of the movie when I wasn’t spitting angry!  How any human could treat another the way some of those women did is beyond me.  Aibileen is a very powerful character and moved me from her very first word.  Hilly, on the other hand… I would like to meet her in a dark alley!  I’m just saying!

I really liked the movie even if it reached into places I would rather not have known.  I knew things were icky “back in the day” but now, I feel as if I have lived it!  Amazing!  Everyone should watch this movie, especially people from the Dirty South!

BTW:  After you watch this movie, you will understand why I had to make Chocolate Pie!  HA HA HA!!  I laughed until my insides hurt.

This shop has been compensated as part of a social shopper insights study for Collective Bias.