Max: the Curse of the Brotherhood Review and Giveaway

We were given the chance to review Max: The Curse of the Brotherhood in exchange for an honest blog review. That in no way shaped our opinion of this game.

We got it to review on the Xbox 360. Del literally had to dig his back out and hook it up in the man cave. Once he hooked it up and started playing this game we were all in there with him watching in total amazement.

There are a handful of games that I really love watching Del play. Jak and Daxter series is one of my all time favorite. Max: The Curse of the Brotherhood has quickly been added to this list of games. I like this game because it has the ability to make me the viewer feel like I’m watching an action packed cartoon. I never know what he’s going to encounter and have to do next. Del quickly becomes the star of the show as Max.

Max has to go through many obstacles to save his brother. At the beginning of the story Max is given a magic marker. He has to learn how to use it to his fullest advantage and in a quick manner too in order to survive.

As the description of the game states, the control do take a bit of getting used to. However, once you get use to using the side scroll feature it becomes easier and more enjoyable to play. My husband really isn’t a fan of using side scroll. However, despite that small turn off he still played the game for hours!

I was in total awe over the obstacles he had to overcome in order to keep going. Surprisingly Del died very few times throughout the course of the game. Yet, there were a few sections that he had to take a couple times to conquer them. All I could think about was if I was playing I’d still be back at the beginning of the game. 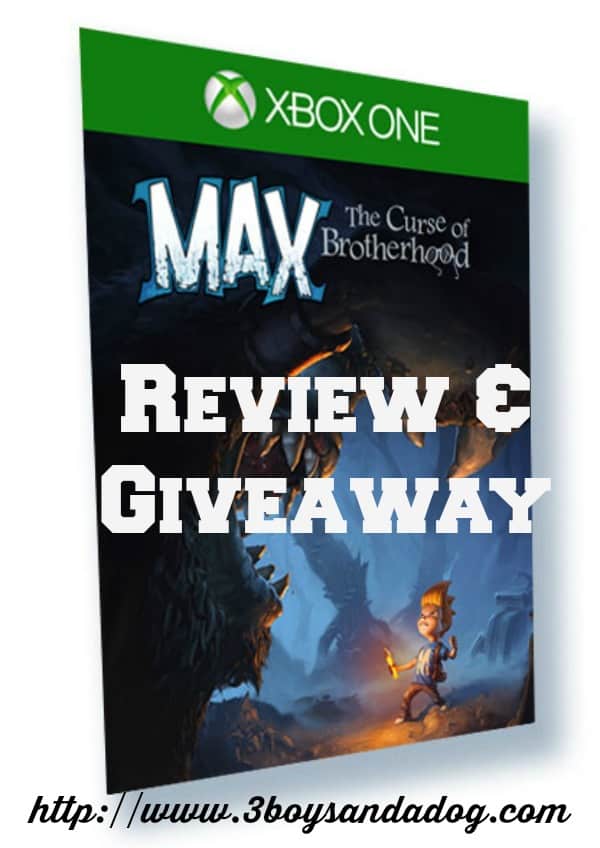 This games is definitely for older kids 10 and up for sure. I can’t picture my six year old as talented as he is being able to quickly figure out what he needs to draw in split seconds to keep going. This game is for someone who is a quick thinker and very analytical. You literally have to draw your next moves in the midst of moving and know how it’s going to look AND how Max is going to react to your drawing.

I’ve always had an appreciation of Del’s skills as a video gamer, but this game only enhanced my pride in his abilities. (Yes, I’m one of those odd wives who is proud of my husband’s video gaming skills because I know how much brain activity it takes to actually play them well.) My kids loved watching Del play this game just as much as I did. My oldest was itching to have his hand at playing it too.

If you have a strategic analytical video game lover then this game is perfect for them. This game helps teach critical thinking, hand and eye coordination, and puzzle solving in a timely manner. I’m very impressed with it.

Here’s a nice little preview of the game:

Your Chance to Win

I’m pleased to announce that I get to give away three copies of this game to three lucky winners. This giveaway is open worldwide. I will be giving away a code for you to be able to download it from your Xbox 360 console. This giveaway will run from July 5th, 2014 until July 19th, 2014. The winner must complete all required portions of the Rafflecopter form. The winner has 48 hours to respond to my winning email announcement from tidbitsofexperience@gmail.com.
a Rafflecopter giveaway

I am an open and honest blogger on Tidbits of Experience
who shares our life experiences along with product reviews and giveaways. I am a proud wife and mother to three kids and a cat. You can find me on Twitter @Tidbitsofexperi.