So, Minnie seems to love leeks.  She sent me a recipe for Hickory Smoked Parmesan Bacon Leeks and that thing blew up Pinterest!  Everyone and their brother has pinned that post.  Plus, they look good.  It has made me determined to try some.  I have never had leeks, but I do seriously get sick of the same sides over and over.  If I could add in some leeks that we like, we would have more sides to choose from!

I don’t think we would dislike Leeks, but I am not 100% sure about what Thomas would think.  He is my most picky eater and ends up with PB&J several nights a week AFTER trying what we have for supper and being hungry later.  He tries.  I do give him credit.  He eats a little of everything and decides he is full.

So, this week my Pinterest round up is all the different leeks recipes I have found! 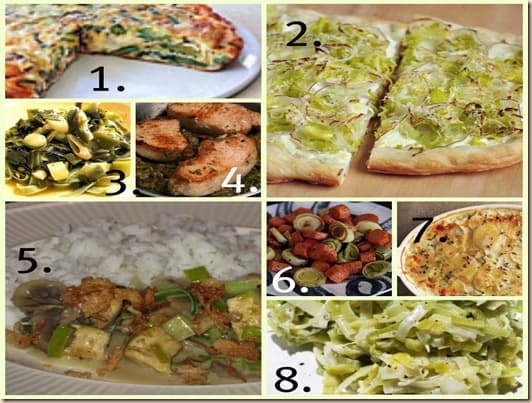 2. Leek, Ricotta, and Lemon Flatbread – Little wedges of this are more substantial than a lot of party food, and have a refreshingly bright taste.

3.  Leeks Braised with Wine and Garlic – I have never bought Wine in my life, so this recipe would have to be changed to suit, but it looks really good.  Don’t you think?

4. Pork Chops with Leeks in Mustard Sauce is another simple dish.  Plus, when we make this, if we don’t like the leeks we could still enjoy the pork chops!

5. Fried Leeks with Chili – this Sri Lankan dish looks really good!  Not sure where the chili part comes in, but it still looks delicious!!

6. Roasted Leeks and Carrots – whether this is good or not almost doesn’t matter, because it is so pretty!!  LOL!

7. Potato and Celery Root Gratin with Leeks – this sounds just Country enough to really satisfy me.  Plus, my kids would probably have no clue that they were eating something new.  This just might be the first thing we test out leeks with!

8. Creamed Leeks – hmm… we have has odd things mashed before (like Cauliflower) so I could see us liking something creamed!  It has two other things going for it… #1 – it is simply and #2 it is French.  So, we can be high class

This post is linked at Susie QT Pies, 3 Boys and a Dog, and Crystal and Company