I have (well HAD until yesterday) two boys in this category.  There are all the obvious things like video games, mp3 players, cell phones, etc.  But, let’s look at some “not so usual” things!

When Uncle Charlie disappears, Alexander and his brother, Ben, help solve the mystery amid some danger. The story is suitable for both boys and girls.

A seemingly normal October turns into an exciting and terrifying adventure for Alexander and his brother, Ben, when they discover that their uncle Charlie may be in danger because of a secret government project he is working on. The boys notice strange happenings around their family’s home; for example, why is there a clandestine protected Wi-Fi network on their forest covered property? When Alexander and Ben suspect that their uncle is being spied upon, they agree to warn him about what they’ve discovered. But on the same night that they tell him about their findings, he disappears without a trace. Now, it’s up to Alexander, Ben, and their family to solve the mystery about what happened to their uncle and bring him home safely. But although they are determined to rescue Charlie, they don’t realize the dangers that lie ahead for them on their journey.

Abraham Lincoln and the Heart of America

Laughter, tragedy and astonishing triumphs abound in this storytelling  biography of our sixteenth president who used humor, strength and moral  clarity to steer a nation and a people through their most trying times.

Mom Says:  Ok homeschoolers, this is definitely for you!  If you use any literature based homeschooling program, then you read A TON!  This historical storytelling Biography of Lincoln is filled with his personal moment, ethical issues, etc.  It is fun to visualize the “people” that Abe comes into contact with through the amazing descriptions!  People like:  Mary Todd, Stephen Douglas, and Robert E. Lee 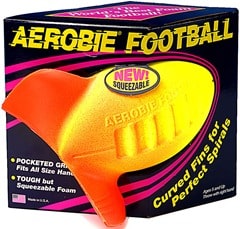 Mom Says:  I thought this would be perfect for Zack to practice throwing with… I was wrong. LOL!  Due to the spirals, this football is only intended for right-handed kids. If you throw with your left, your ball spin the opposite way.  LOL!  NO big, he enjoyed trying to throw with his “other” hand and Tripp LOVES to play with it.  All-in-all a great product!

*Disclaimer:  What you will see throughout the month of November are my top picks based on customer service, quality, uniqueness, and value for your buck.  If they are kid toys then they also have to be kid-approved by my children and nieces!  Any opinions stated are strictly my own!  No money changed hands, although the items were sent to me to help facilitate my reviews.*