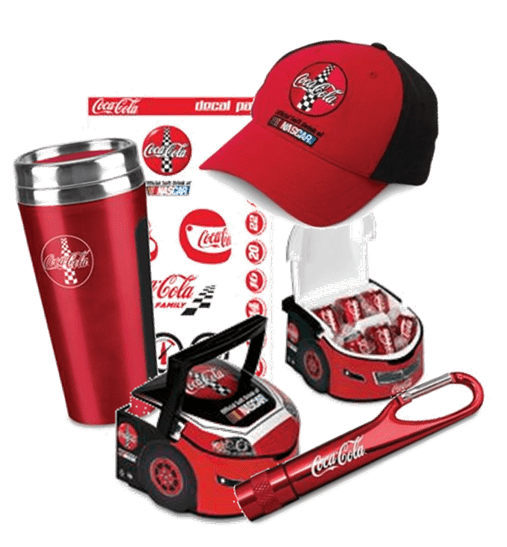 Fall is in the air which can only mean one thing – the NASCAR Chase for the Sprint Cup series is in full swing! This November, bring family and friends together to watch one of the most anticipated series of races in the world of NASCAR. The Coca-Cola Racing Family currently has three drivers in the Chase – Denny Hamlin, Tony Stewart and Greg Biffle.

Which Coca-Cola Racing Family Driver would you like to see win the Chase?

Coca-Cola and @CocaColaRacing know the thrill of being live at the track. But, have you ever wondered what goes on inside the cockpit? Or ever wonder how your favorite driver likes to prepare for a big race?  This year, Coca-Cola wants to help you answer those questions!

As a long-time sponsor of NASCAR and many of its drivers, Coca-Cola wants to help fuel your curiosity by hosting a Google+ Hangout with the three Coca-Cola Racing Family drivers that are competing in the Chase, as well as special guests Elliot Sadler and Dale Jarrett!

You and I will each have the opportunity to secure one text-in question for the Hangout (one question from you and one me.)

One question isn’t enough? Not to worry! You can follow the @CocaColaRacing Twitter handle and tweet a question with the hashtag #CokeRacingHangout asking your favorite driver in the Hangout a question. Questions will be chosen at random by the Hangout moderator prior to the start of the Google+ Hangout on Saturday, November 3rd at 12 PM central.

Get revved up for NASCAR by following @CocaColaRacing in order to ask drivers questions via Twitter using the #CokeRacingHangout hashtag in your tweets in the days leading up to the Google Hangout!

One lucky 3 Boys and a Dog Reader will win the above prize pack valued at $120, which includes:

·         A Coca-Cola Branded Recycling Koozie to keep your drink chilled

PLUS, you could possibly get to hang out in a Google Hangout with Me and the above mentioned drivers.  Your questions will also be submitted and possibly answered!  Cool, right?  Yeah, Tripp certainly thinks so!

Since this has to wrap up so quickly, I am going with Rafflecopter this time around.

Open to USA Only

Coca-Cola provided me with the Coca-Cola Racing Family Prize Pack. The prize was provided and may be shipped to the winner by Coca-Cola, but Coca-Cola is not a sponsor, administrator, or involved in any other way with this [contest, sweepstakes, etc.]. All opinions expressed in the post are my own and not those of The Coca-Cola Company.